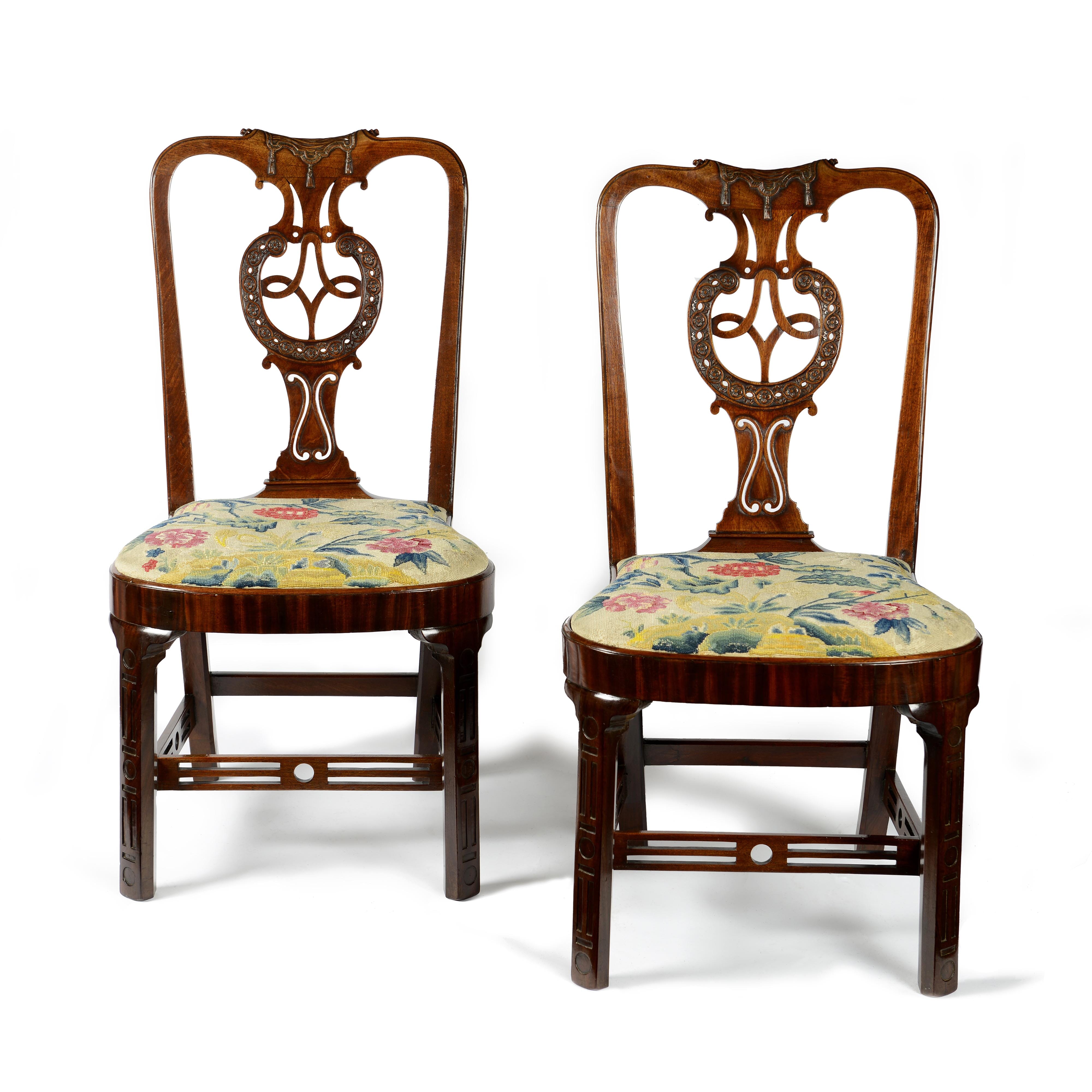 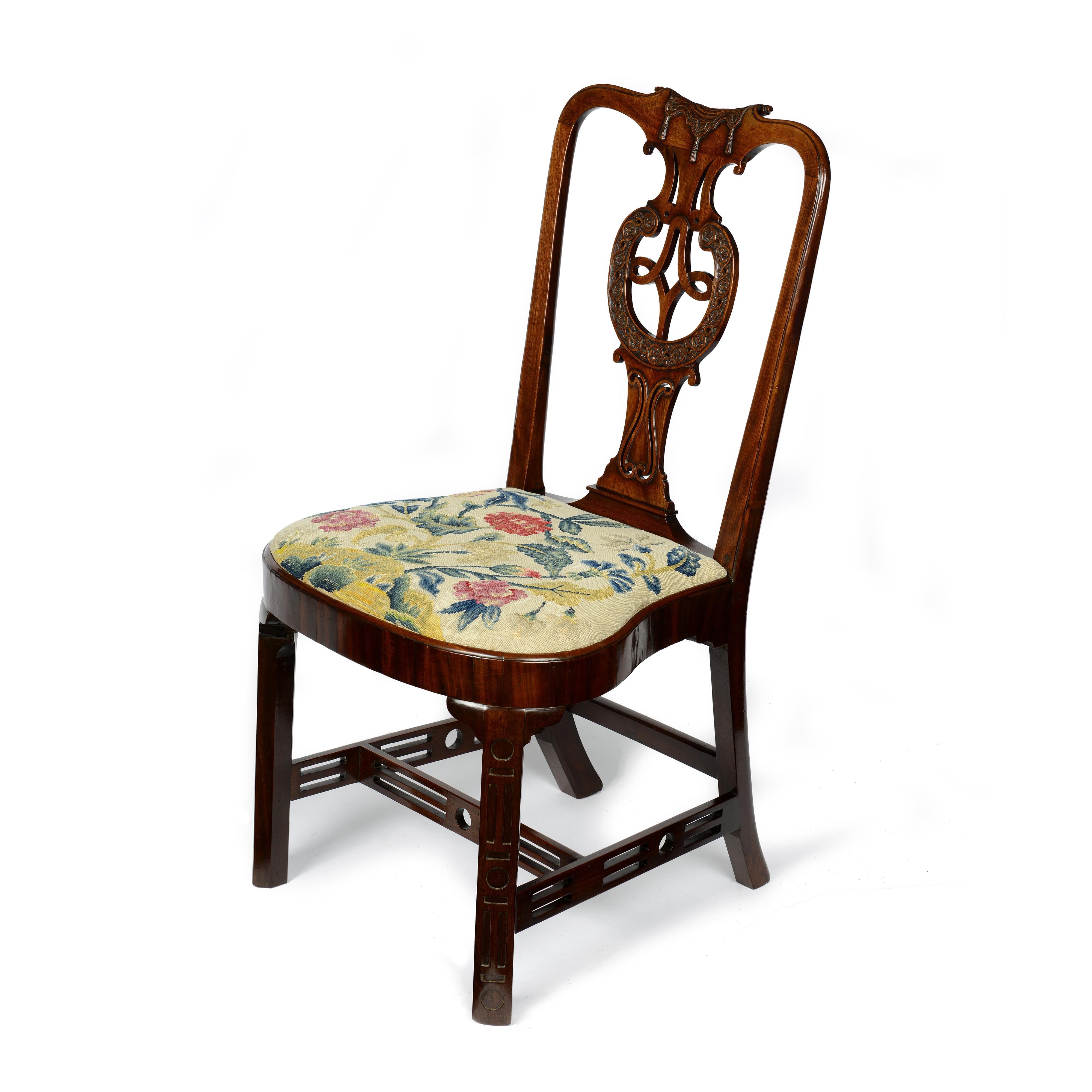 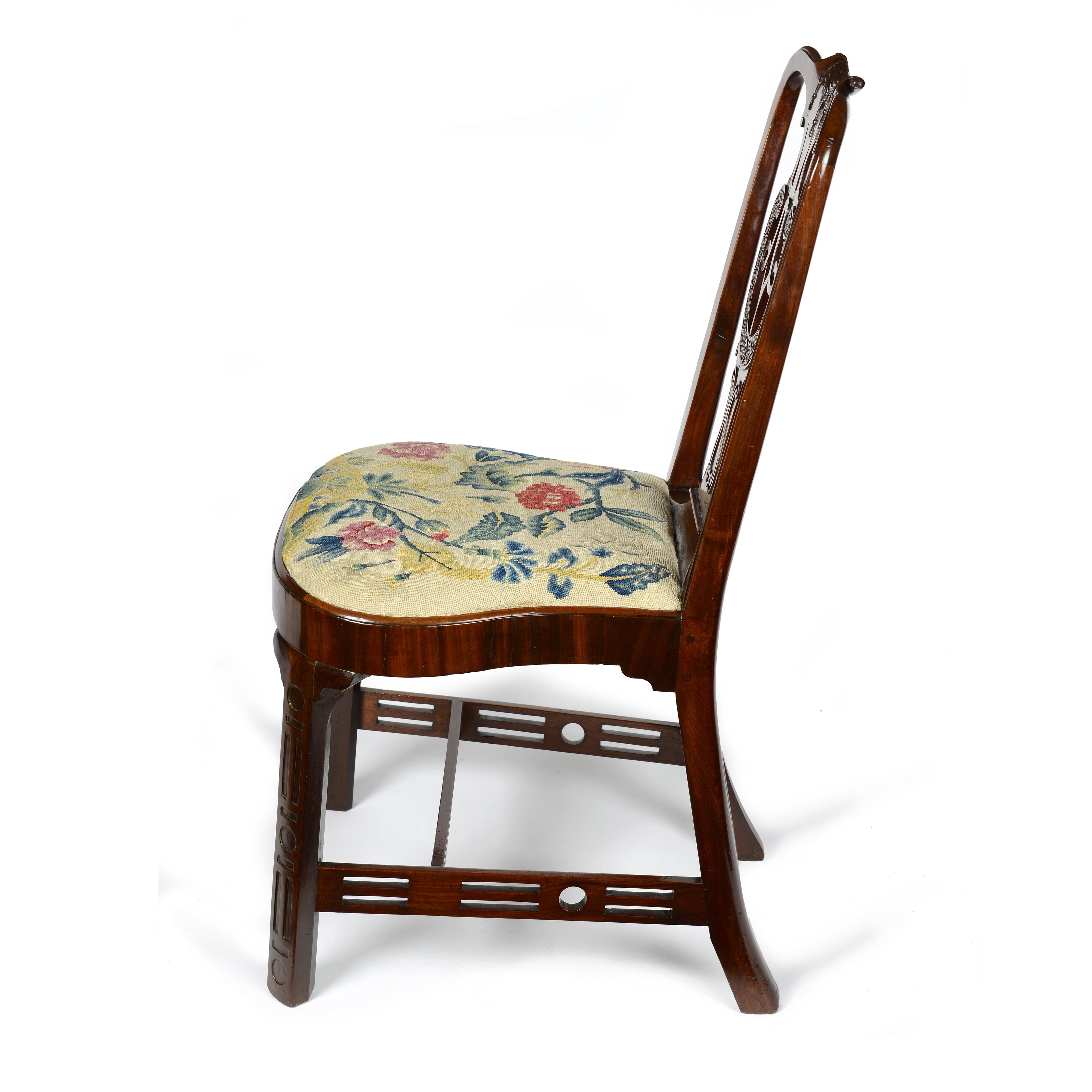 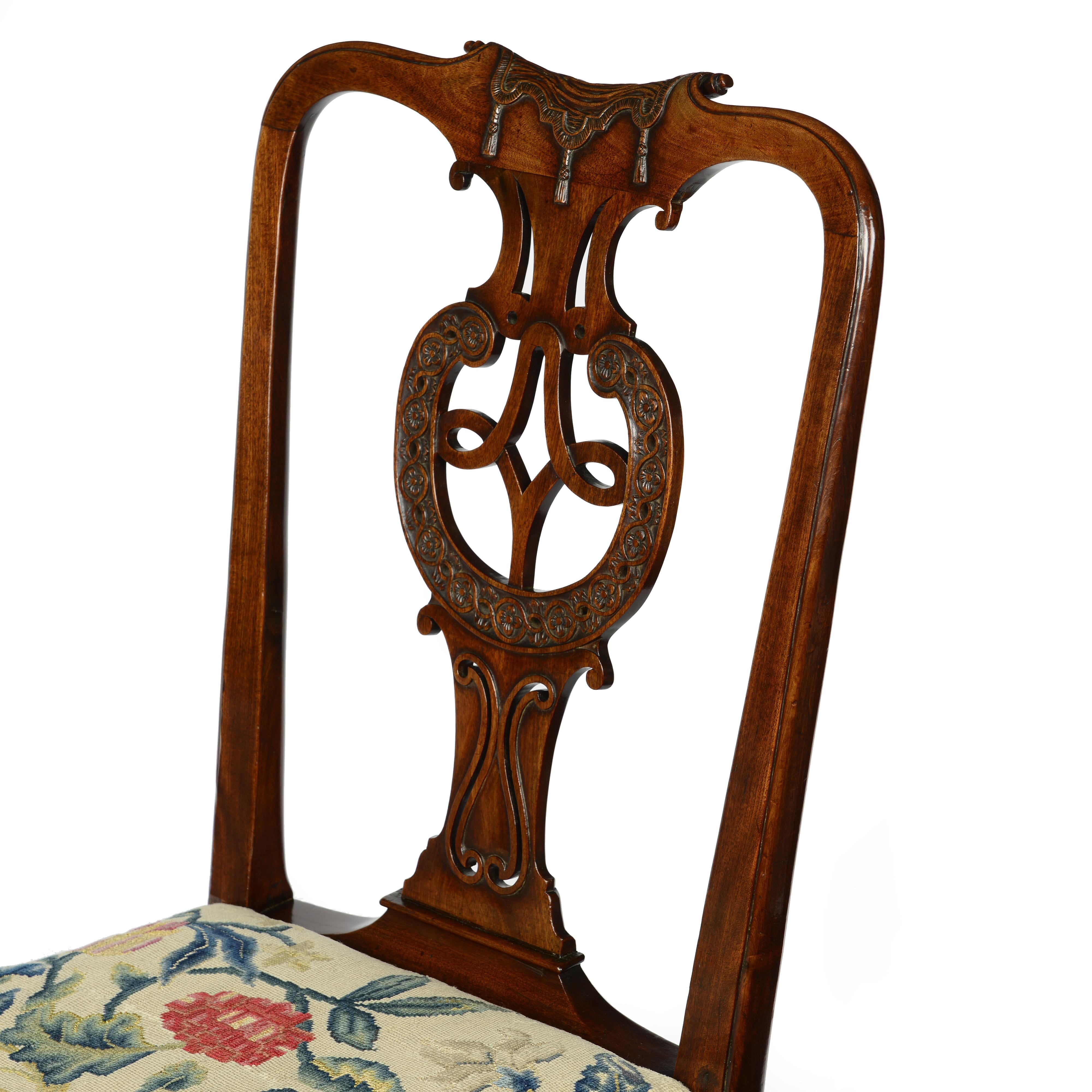 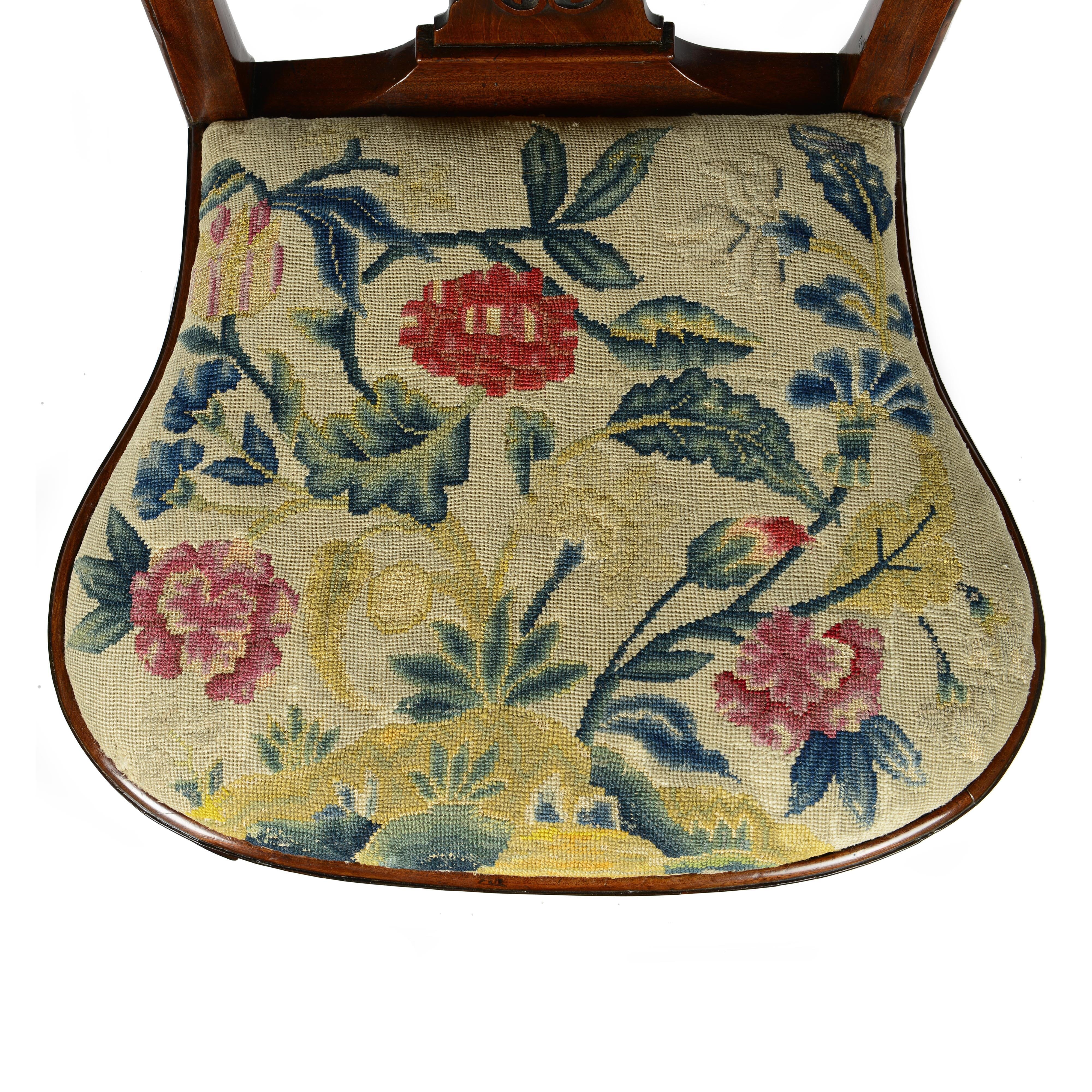 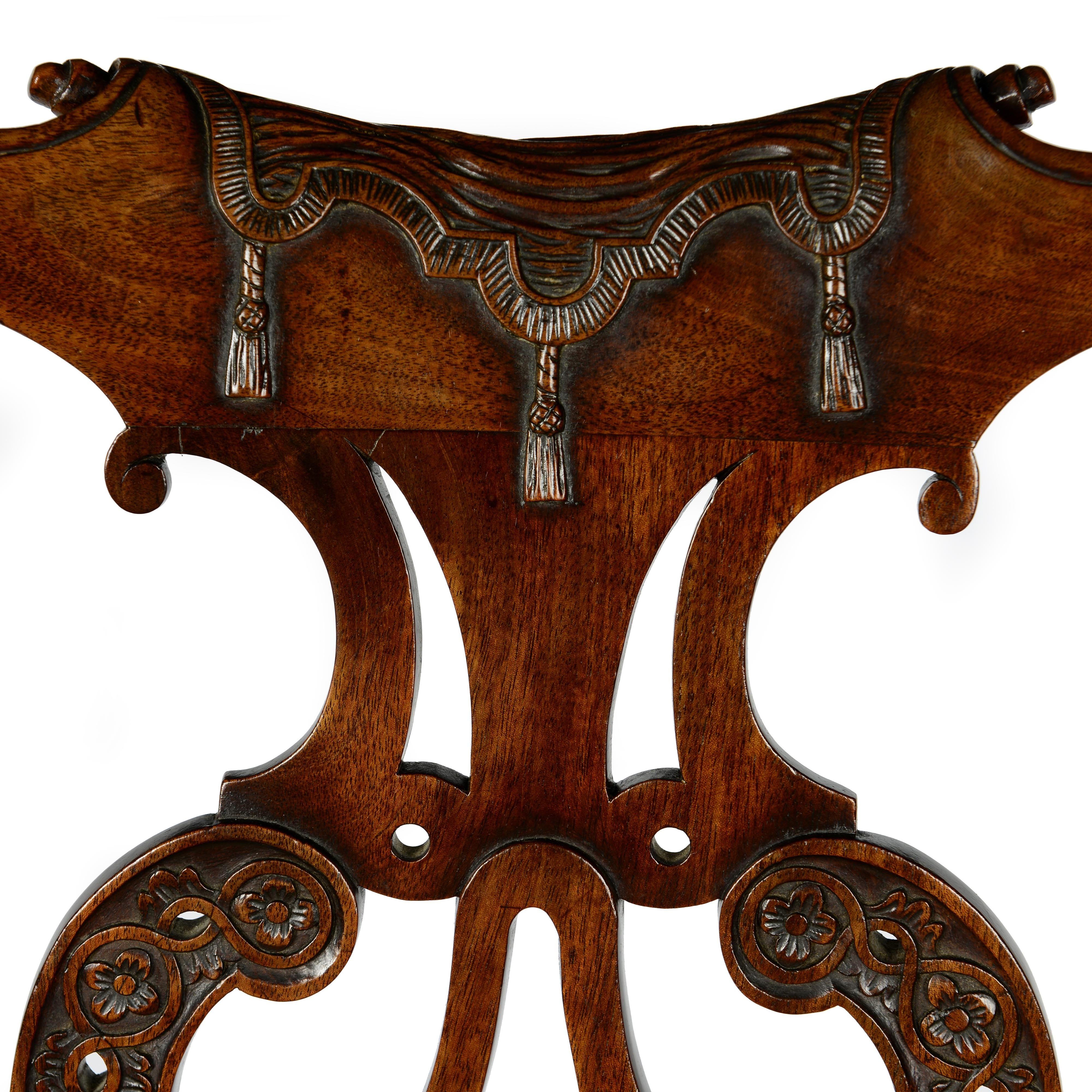 Further Information: These chairs are Scottish versions of an often seen mid eighteenth century chair pattern, although not featured in popular design books of the period. Comparable examples, can be seen at Temple Newsam House and Lotherton Hall. The Scottish signature features include the dished cresting with "roller", that is a tightly scrolled rail that resembles a rolled piece of paper; thistle shaped tassels (in this case fringing a carved cloth draped over the cresting); and interlace carving on the central crescent. The plain holes drilled through the splat are a common characteristic of Scottish chairs of this date, whilst the geometric fret of the stretchers was a feature used particularly by the Edinburgh maker Alexander Peter.

Alexander Peter of Edinburgh, together with Thomas Chippendale, was one of the principle furniture makers for Dumfries House, Ayrshire, one of the UK's most important 18th century classical houses. Dumfries House was designed by the Adam brothers and is internationally renowned for its unique collection of furniture originally bought for the house and made by Thomas Chippendale and his contemporary Edinburgh furniture makers William Mathie, Alexander Peter, and Francis Brodie. In June of 2007, with the help of Prince Charles and a consortium of foundations, the 2000-acre estate was purchased for £45 million, to save its historic fabric and furniture for the nation. A set of chairs of different design, but with many similar stylistic details and features can be found in the dining room of Dumfries House.

Stobhall Castle, the home of the Earls of Perth, lies perched high above the left bank of the River Tay, 7 miles northeast of Perth. Set around a courtyard, the property includes a 14th century chapel, which was converted for domestic use in 1578 and a little tower house was built on to it. Long the home of the Drummond Earls of Perth, the estates were forfeited in 1745 due to the then Earl's enthusiastic support for the Jacobite cause. Restored to the family in 1784, Drummond Castle and Stobhall passed through marriage to the Willoughby de Eresby family in 1807. In the 1950s this family were on the point of passing Stobhall into the care of the state when David Drummond,the 17th Earl of Perth (1907 - 2002), asked if he could acquire Stobhall to restore it as his family home.