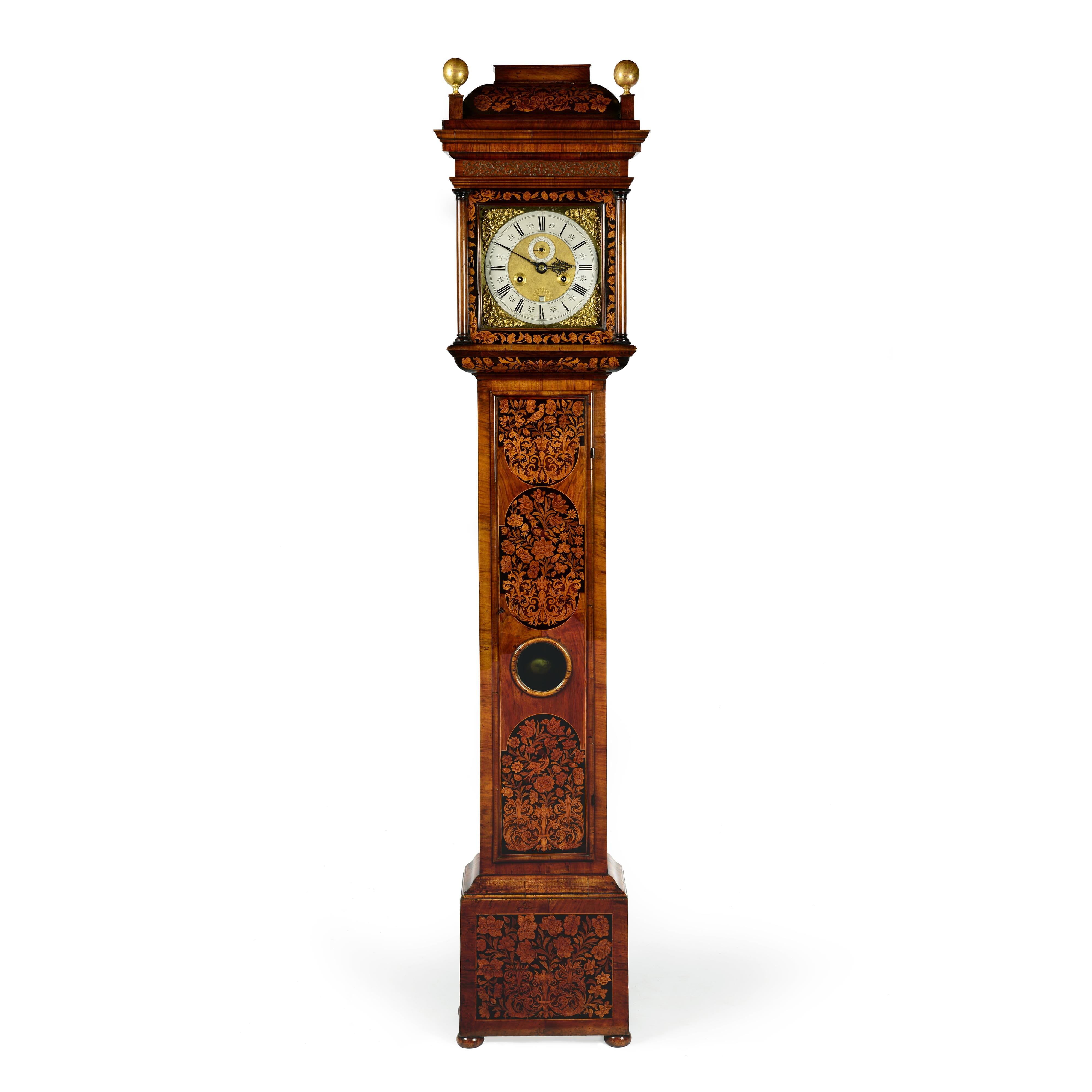 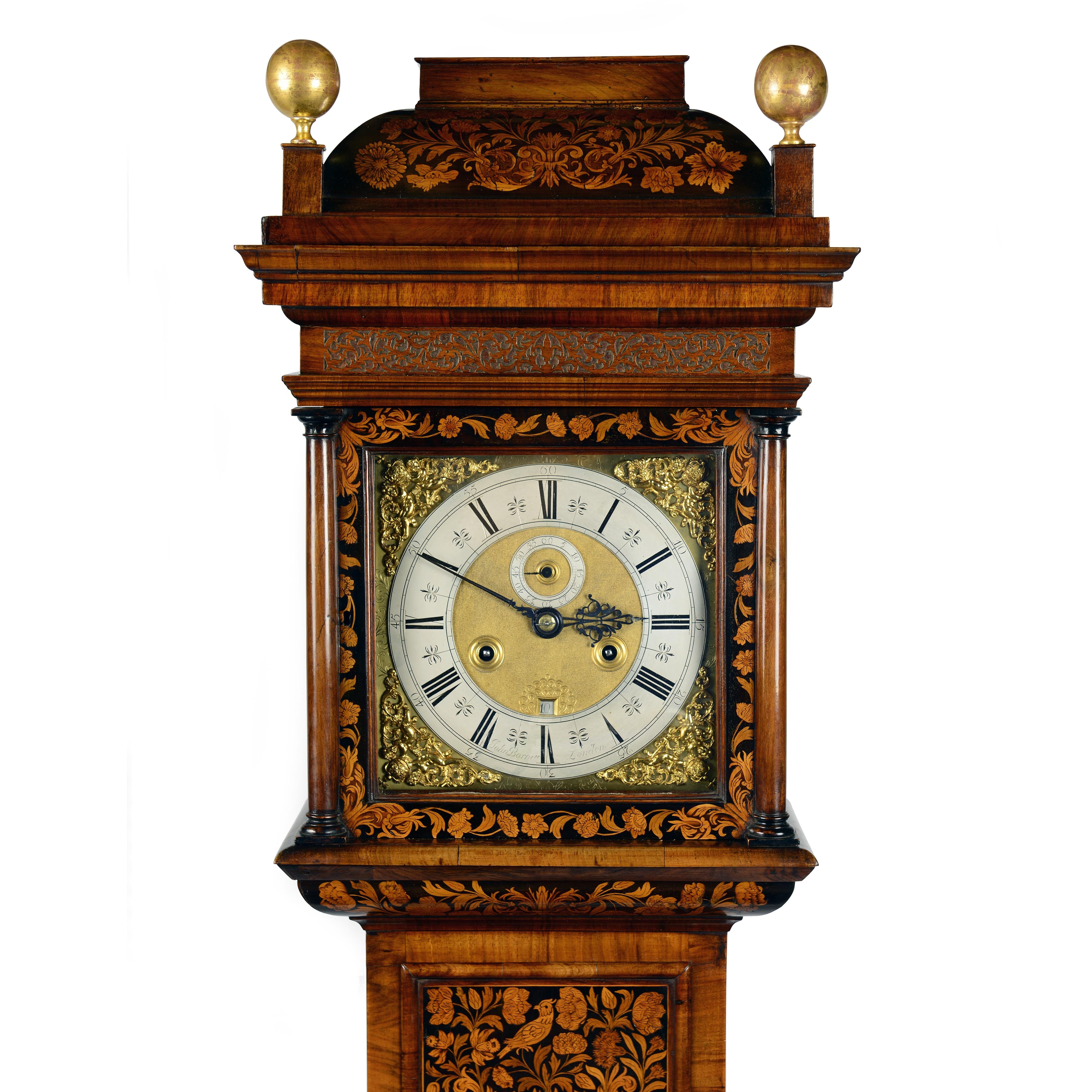 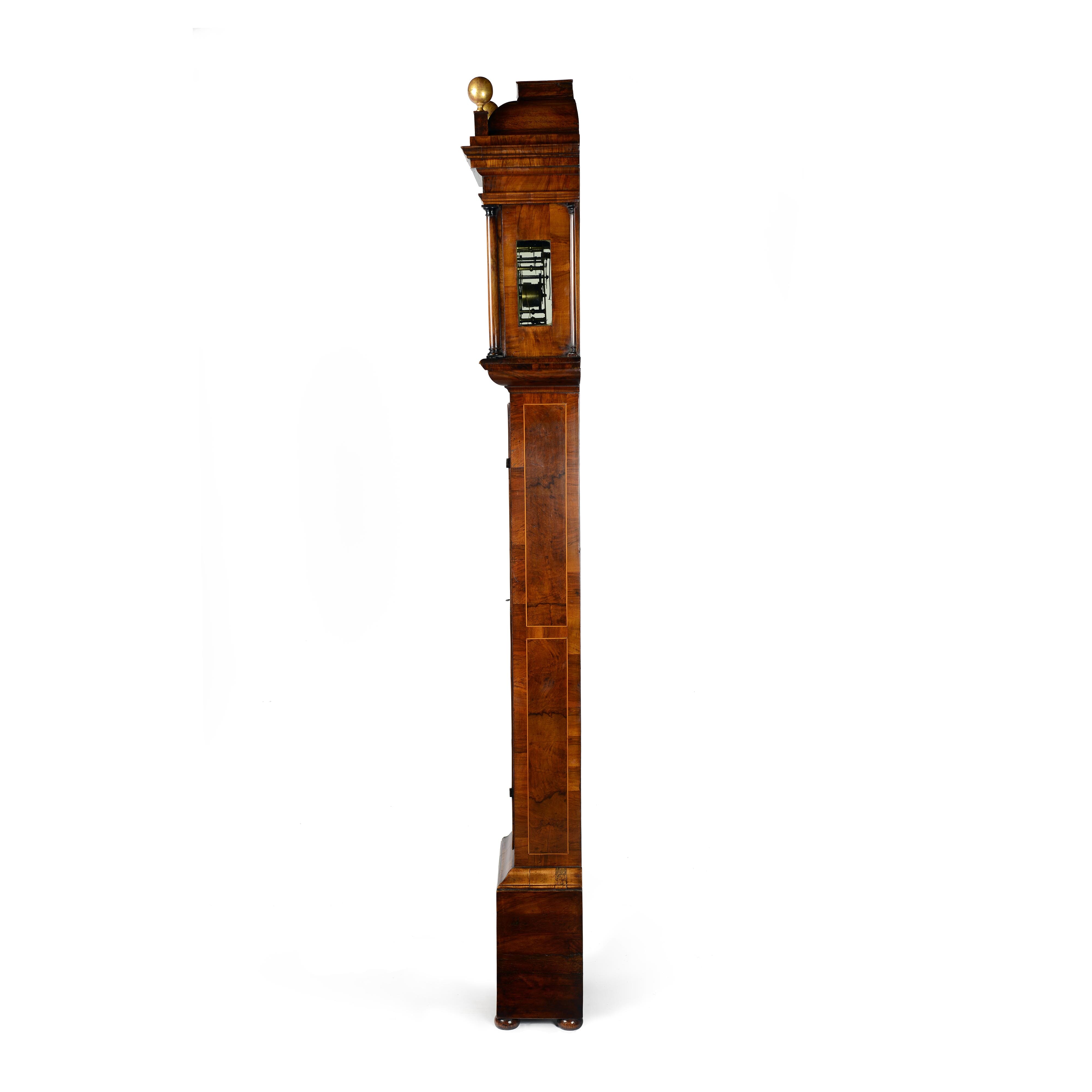 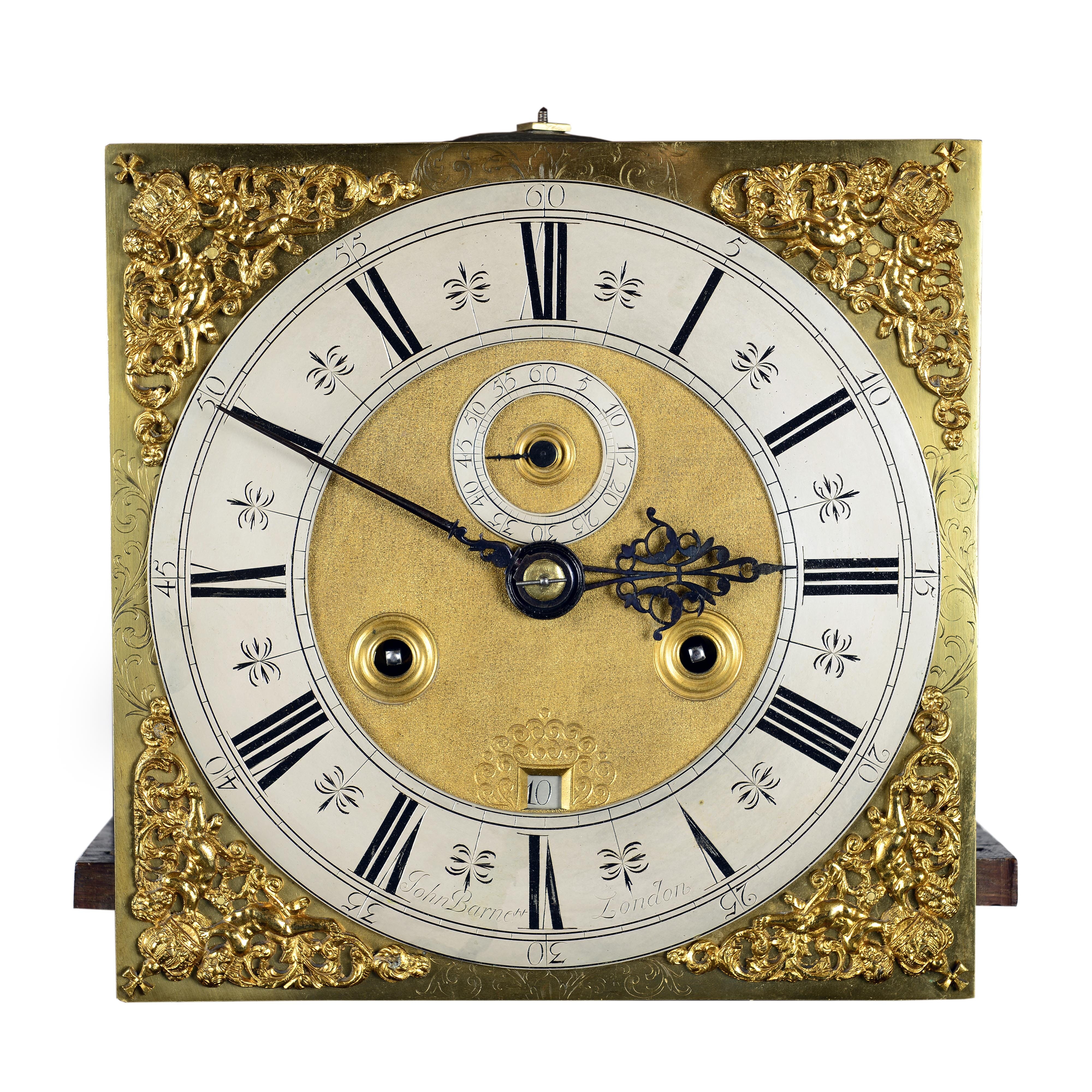 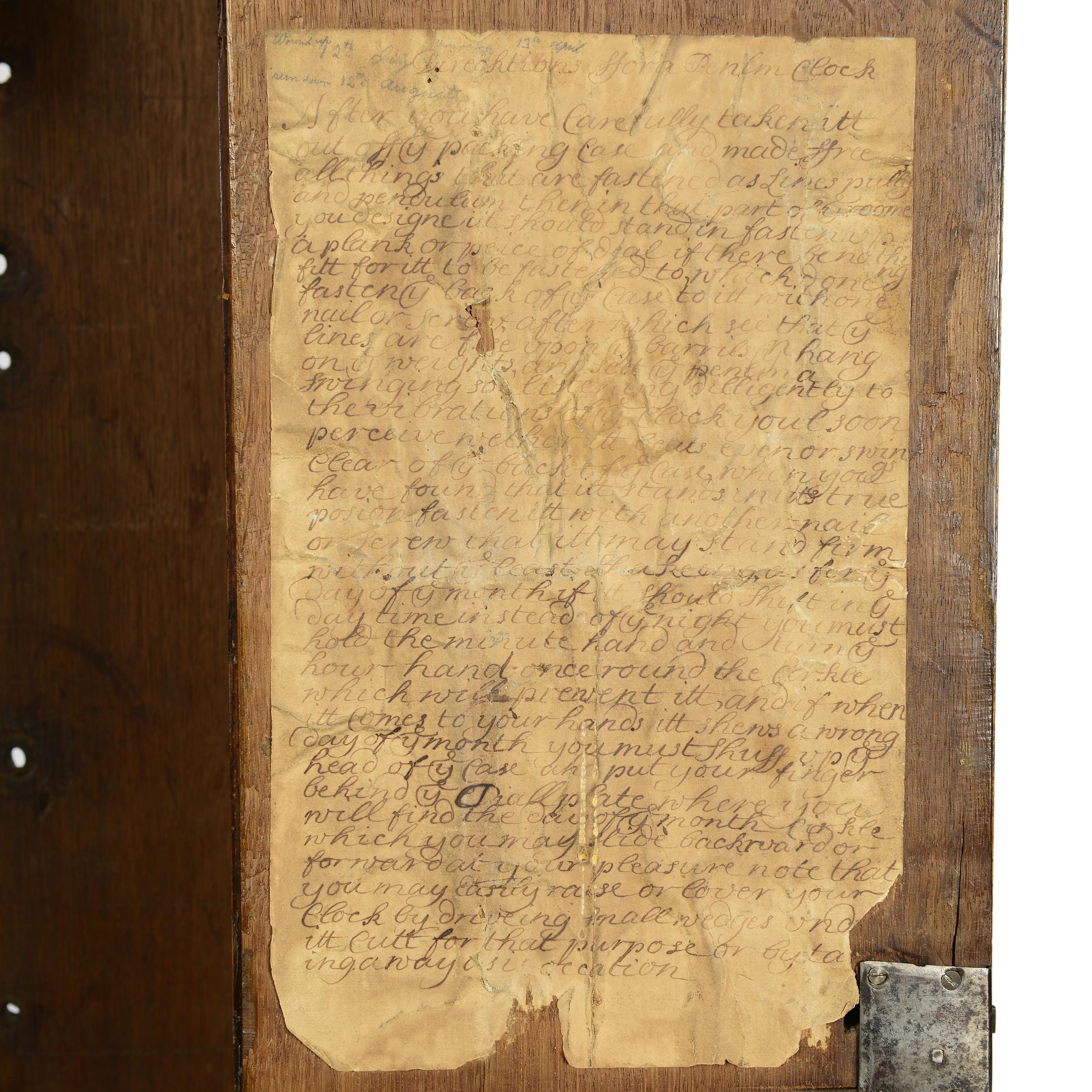 The case with box upstand to the domed floral marquetry decorated caddy superstructure above moulded cornice and fretwork frieze over foliate trail inlaid hood door applied with three quarter columns to front angles, above convex inlaid throat moulding and 42 inch door centred with a circular lenticle and inlaid with three shaped marquetry panels decorated with bird inhabited foliage on an ebonised ground within a walnut field, the sides with twin line edged panels with crossbanded surrounds, on conforming marquetry panel fronted plinth base with bun feet.

Further Information: The first clock designs were very basic being made for a purpose and not to be decorative in any way. Over time the designs evolved and the first recognisable longcase clocks were being made by makers like Edward East and Fromanteel during the 1670s. These cases were very slender in design, made principally of oak or pine and veneered in fruitwood which was then ebonised to create a black polished finish. Almost all of these early clocks were of 30 hour duration but the 8 day and later month duration longcase clocks followed. There were even a very few that were of year duration. The rarer month duration movement needed, heavier weights, a more complicated movement, heavier front and back plates linked by a greater number of pillars than in 8 day movements.

John Barnett is recorded in Brian Loomes Book - The Early Clockmakers of Great Britain as born circa 1662, he was apprenticed to John Ebsworth in 1675 and gained his freedom of the Clockmakers' Company in 1682. Barnett worked from the sign of the Peacock in Lothbury, he was a very competent maker with several long duration clocks like this one as well as quarter chiming clocks; he is thought to have died in 1702. It is extremely rare to have the original makers instructions still attached to the inside of the door.

Condition: Excellent. The movement has been fully overhauled and serviced. Base apparently original. All the marquetry appears to be fundamentally original, with a few minor restorations.

Provenance: Private collection in the Berkshire.